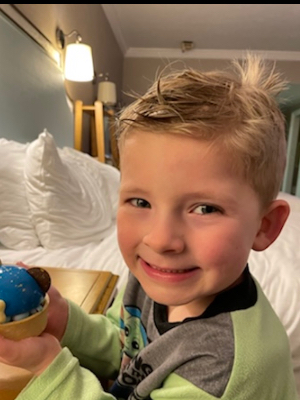 Cole
We can’t wait to see you all at the walk !!

In most ways Cole is your typical, crazy 5-year-old. He loves to get into everything, most of which he shouldn’t! He enjoys playing outside, swimming, riding his bike, and playgrounds—probably because he can do all the things he isn’t allowed to do in the house.

Around 3 years old we started to notice things were progressing a little differently than with his older sister. We didn’t think much of it at the time as all kids develop at their own pace. It wasn’t until he started his first year of Pre-K that his teacher asked if we had ever has his hearing checked. We took Cole to see an Audiologist and we learned he was suffering from bi-lateral hearing loss. This was right before the world basically shut down due to Covid. In the middle of everything going on in the world we were taking him from one appointment to the next to try and figure out what was happening. As his hearing began to get progressively worse we were able to get him hearing aids. They did not do anything to help his hearing and he then became a candidate for Cochlear implants.

We were extremely hopeful that this would be the resolution we were looking for, but it turned out life had other plans. After months of testing and re-testing there was still no improvement with the implants. His surgeon was convinced something else was wrong and wanted Cole to see a geneticist. On November 8, 2021 we received the news Cole had Mitchell Syndrome. Like most people we had no idea what this meant or what the future would be for our little boy.

Cole has been amazing through all of this, probably stronger than both of his parents. He still does everything he loved to do before he lost his hearing. We are learning to communicate through ASL and he is picking it up extremely fast. He recently started at the Pennsylvania School for the Deaf and seems to be loving it.

We know we have a long way to go, but we are very lucky to have an amazing circle of family and friends that now includes the Mitchell Syndrome family.

Can I count on you to step up for hearing health?

With your help, we will empower people to live well by providing vital resources, information, programs and support services. please when you donate go to Mitchell and friends foundation so the money we raise helps get more done to help this rare condition.