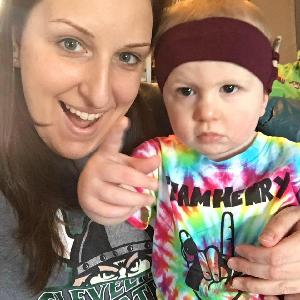 Every October since 2016, I've walked at the Washington DC Walk4Hearing. I'm walking for so many reasons:

1. My nephew Henry and my family;
2. The next generation that will be faced with similar obstacles as I have;
3. The 48 million people with hearing loss; and
4. Having realized in the last three and half years how much HLAA and its supporters have made me realized how much I was missing out on hearing technology!

My nephew Henry is the reason I walk because he will be facing similar obstacles that his parents and myself have faced in the last 30+ years, he's the next generation and he's going to make his voice heard!

This past July, I had been implanted with my second cochlear implant - something I hesitated to do. I was afraid of the imbalance versus my right ear which has been implanted for 15 years, but having only worn the second side for a short amount of time (3 weeks), my auditory perception slightly increased in comparison to wearing a hearing aid. I was thrilled! I'm looking forward to how the next year goes as my brain process and learns new sounds.

HLAA is the nation's voice for people with hearing loss. But, to me, HLAA has opened my eyes to technologies that helps to benefit those with hearing loss. I've been introduced to hearing loops, which was a mind-blowing experience at first. I wished I knew sooner. HLAA's supporters have also introduced me to many new avenues that I never thought possible - walking at the Washington DC Walk4Hearing in 2016 was a life changing experience!

Your donation will help to continue programs and services nationally and locally for adults and children. They need your support to gain support from these programs for years to come.

Please consider supporting Team Henry with a donation and/or joining us at the Walk!